Outrageous facts about skating in Australia 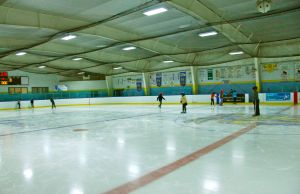 How many indoor ice rinks do you think there are in Australia? Go on, say a number out loud. Bear in mind that Australia’s population is 22 million.

There are in fact only 22 rinks. That’s one rink for every 1 million people!!!

In my home town, Canberra, we have one rink. It costs $14 per person (plus $3 skate hire each). So, for my family of five it is an expensive outing costing $70 (or $85 with skates). In Ottawa it only costs $5 for my family to skate indoors. If I want to skate outdoors, I have the choice of countless rinks that pop up over winter in local parks, or the longest skating rink in the world- the Rideau Canal. And all of these are free – nada – nothing – zero!

The closest estimate I can find is roughly 2500 indoor rinks. And remember that doesn’t count the thousands of outdoor rinks that are constructed in winter.

So I guess Australia loses hands down in the ‘we have more rinks than you’ competition, but to save face, we have an ice rink up our sleeve that is arguably one of the coolest in the world!

Last winter a rink was set up for the first time on Bondi beach – yes, actually on the beach! 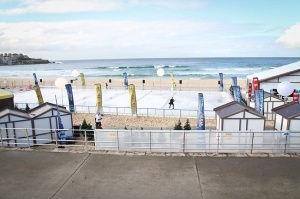 Bang smack in the middle of Bondi beach (pic by A.Szilvasi)

The 900 metre square rink was constructed in 2011 as part of the Bondi Winter Festival.  The 18 oC  (64 oF) temperature wasn’t a problem, with the specially designed rink able to cope in temperatures up to 30 oC (86 oF).

The bad news was that it cost adults $20 and kids $15 to skate on the rink for 45 minutes (plus $7 skate rental). I still think it’s a small price to pay for the one-off experience of skating on the beach!

Similar rinks were also set up in Melbourne, Canberra and Brisbane (where the average maximum temperature in the middle of winter is 20oC).

Skating on Bondi beach has just made it onto my bucket list!

2 Responses to Outrageous facts about skating in Australia